Difficult patient with infertility - Ways to solve the problem 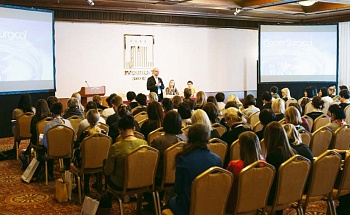 Experts throughout the world in reproductive medicine took part in the conference, which was held by Nova Clinic.

Thor Haar, a Danish doctor from Aarhus University, discussed how the patient's vaginal microbiome affects the success of the ART program. In particular, research results indicate that the chances of becoming pregnant with bacterial vaginosis are decreased. In addition, the violation of the microflora of the genital tract can cause miscarriage and premature birth.

The speech of Stephen Fleming, the honorary member of the University of Sydney, was devoted to the implantation failures and ways to solve this problem. According to the statistics, which was provided by Dr. Fleming, every fifth woman in the past had a miscarriage. In about 80% of cases, early pregnancy termination is due to implantation failures. At the same time with age the risk of miscarriage increases. Stephen Fleming discussed how PGT (preimplantation genetic testing), physiological intracytoplasmic sperm injection can help to solve the problem. Stephen Fleming also noted that a combination of these techniques could help to minimize unsuccessful implantations.

Head of the department of prevention and treatment of miscarriage at National Medical Research Center for Obstetrics, Gynecology and Perinatology named after Kulakov Tetruashvili N.K., DMSc, gave recommendations to her colleagues about the management of pregnancy in women with anamnestic records.

Dr. N. Oparina, Ph.D., physician and geneticist of the Clinical Institute named after M.F. Vladimirskiy, spoke about modern methods for diagnosing chromosomal rearrangements, and the importance of karyotyping for patients with idiopathic infertility and reproductive losses.

The report of Dr. Zorina, the medical director of Nova Clinic, was devoted to the conduct of ovulation in the conditions of female consultation. Dr. Zorina also emphasized that today it is crucial to use clinical recommendations (Ministry of Health of the Russian Federation, March 2019) about the diagnosis and treatment of female infertility.

Dr. Buzyan highlighted the importance of the role of a hemostasiologist in the management of patients with multiple unsuccessful IVF attempts. Dr. Buzyan noted that the use of low molecular weight heparins could increase the chances of successful IVF program. Thus, all women in the middle and high-risk group for the development of thrombosis should be referred for the consultation to the hemostasiologist.

Dr. Volkova focused on the genetic causes of failure of ART programs and miscarriage. Dr. Volkova provided statistical data, according to which balanced chromosomal rearrangements are detected much more frequently in infertile couples with miscarriages records rather than the average in the population. In this regard, Dr. Volkova recommended referring patients for karyotyping. If any violations are detected, preimplantation testing of embryos can be carried out as part of the IVF program, allowing to transfer into the uterus only those which are genetically healthy.

The main objective of the conference was the search for integrated approaches to the problem of infertility treatment in complex patients, based on close interaction between physicians of different specialties.