Vegetarians have difficulties to conceive baby 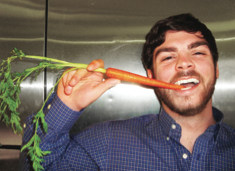 Over 4 years American specialists have been studying the influence of a dietary intake on fertility and, finally, they have arrived at a conclusion that the refusal from meat has a negative effect on men´s reproductive functions. The general sperm count is reduced substantially in vegetarians: 50 million spermatozoa are opposed to 70 million in those who included meat dishes in their diet. Moreover, sperm mobility is 30% inferior in men who eat only vegetable food, the specialists say.

What is the reason for this? The researchers believe that phytoestrogens – compounds found in soya – may affect men´s fertility, as they produce an effect similar to that produced by female hormones (estrogens) do, though it’s much milder. However, not all their colleagues blame phytoestrogens for causing testosterone reduction (and, consequently, spermatogenesis deterioration), as this supposition should be considered only as one of possible theories.

Another possible reason for men’s infertility is vitamin В12 deficit which is found in vegetarians.